It’s been a great few days as a Lincoln fan hasn’t it? To sit proudly at the top of the league after nine games is a great feeling especially as we’ve already been to Tranmere, Dagenham and Macclesfield.

I woke up Sunday morning and the first thing that crossed my mind was ‘we are top of the league’. I often find a song reverberating around my head during the day, a bit of ska from the Interrupters maybe or a catchy chorus from the King Blues 2005 album Under the Fog. However from 5pm Saturday the only song that has been in my head goes like this:

I’ve almost wanted to go out and make a little trophy proclaiming us winners of the first month of the season. I know it’s premature to be getting carried away but we have had such a torrid time, arguably even last season as the foundations for change were being laid. Like every other Lincoln City fan I’m going to relish these opportunities to show a bit of pride in who I support because for over a decade we’ve had to hide it like a dirty secret.

On paper everything looks good for us to be further ahead of the pack come 10pm tonight. Dagenham and Dover will take points off each other, out of form Tranmere face a tricky trip to York and FGR host a Ronnie Moore inspired Eastleigh in their local park. Even play off chasing Macclesfeld have to face Wrexham. We have the joys of Solihull Moors who are out of form and suffering from a shaky defence. What could possibly go wrong?

Everything because as much as we’ve been able to celebrate the fact we’ve won the first month of games we know that Lincoln City fluff their lines on the big stage. Whenever we go top, whenever we go to a play off final we always seem to be able to pull defeat from the jaws of victory. We are used to being let down, we’re used to failing to capitalise on good positions and we’re used to losing home games we should easily win against so-called lower opposition. Tonight frightens me. 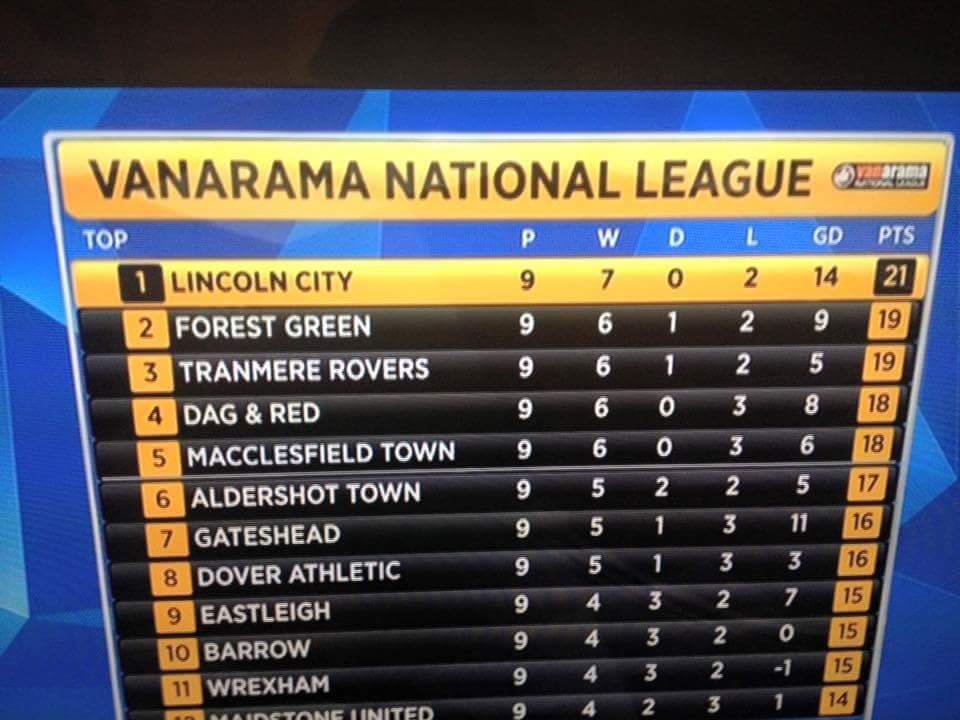 It shouldn’t really as we’ve already shown we can deal with weaker teams by scoring ten in two games against North Ferriby and Southport. However I also remember going into that home game with Sutton convinced we’d be sat on nine points from nine games, and instead we dropped down to mid table within four short days. Things change very quickly at this stage of the season.

I’m also concerned that a bumper crowd almost always means a poor performance. This season again has been different with big crowds and good wins over North Ferriby and Gateshead, but Lincoln City traditionally freeze when the natives come out to have a look at how we are doing. Saturdays win has set us up to suffer a big fall tonight if were not on our game.

I don’t for one second think the meticulous and comprehensive planning that the Cowley brothers put into their training will allow us to roll over and have our bellies tickled by Solihull, but I don’t think they’re going to come here and capitulate like North Ferriby did. I expect a tough fought game tonight full of hard tackles and desperate scrapping from the visitors. If we can remain composed and control the game as we have done so many at home this season we ‘should’ be fine.

I’d wager that Adam Marriott will start tonight but if it is a rough and tumble affair expect to see him withdrawn after 60 minutes or so. I also think new boy Tom Champion will be on the bench having only trained with us for a couple of games. He’ll probably get half and hour towards the end as well at the expense of Bradley Wood or Lee Beevers.

I said if you’re in the top five with ten games gone then you’ve a good chance of kicking on through the season and I think if you’re top after ten games you’ve made a statement of your intent. Tonight we have the opportunity to secure top spot with 20% of the season gone, and whilst we’ll be awarded no prizes it will serve as proof that we are more than capable of going on and qualifying for the play offs at the very least. However every good result at the likes of Tranmere has to be backed up by getting the job done in routine games at home.

I hope by the time I return home I’ve seen yet another step change in the fortunes of my football club.

However until 7.45pm tonight we are still top of the league, so don’t change those profile pictures, don’t dampen your optimism and don’t stop believing at all. We’re Lincoln City, we’re top of the league.

I’m entered into the Football Blogging Awards of 2016 and if you read and like my blog I’d urge you to vote. You can do it two ways, if you have twitter there is a link below to take you straight to a tweet you can use to register your vote

Tweet: I am voting in @TheFBAs for @staceywestblog as the Best #New Football Blog

If Twitter isn’t your thing just click the link below and write staceywestblog – Gary Hutchinson in the Best New Blog category. I appreciate all your support and messages.