It’s time for the sixth collection of nominees that you, the Stacey West readers, have put forward as the worst Lincoln City signing ever.

Before you scroll down, a repeat of the housekeeping bits that I’ll put on all the group articles. This isn’t just so I can copy and paste it each day to save time either. Honest, I said the same yesterday.

I’m not attempting to say these footballers were bad; some of them had really good careers, appearing in the top flight, European football and even for their country. What we’re looking for is the worst signing Lincoln City made, based on their arrival and their time here. I urge you to remember that; a player we paid big money for is, by definition, a worse signing than some poor lad we grabbed from Northwich when we were skint. A player who didn’t play at all can’t possibly be a worse signing than one who shipped five goals on his only appearance, can he? I guess that’s for you to decide.

Also, for those saying we shouldn’t focus on negatives, this is actually a positive article. I want people to read some of the players’ names on here and perhaps think on when they call this summer the ‘worst window ever’. It really isn’t, and we’ve had some truly awful signings over the last forty years, which is the time period these players have been pulled from. By the way, if I missed your player, my apologies, but everyone put them on different social media channels, not in the website comments and I really haven’t had the time to scour all the different groups. Also, as much as Chris Sutton boiled my wee as well, he just doesn’t count as he was a manager, not a signing.

If you are a player featured on here, please don’t take offence. Look at it like this; I once worked for a company called Timber Stair Manufacturers. I did it during a time of immense emotional turmoil and I felt I’d given it my best shot. To be fair, I was awful, and I’m sure Dave at the company wouldn’t be as bold as to say so. However, the people I served, those whose stairs I measured, would say otherwise. They’d be right, whatever the circumstances. Nobody is saying you were a bad player, just that when you played for Lincoln, someone felt you were (not necessarily me btw).

Also, some of the nominees just don’t deserve to be on the list; today is plenty of evidence of that! Still, I used the nominations I was given and that means some players get a bit of a pounding for no reason. Anyhow, here are the nine players in Group F. To make it fair, I’ve randomised the groups to include players from across different ages. Have a read, and pick the worst at the bottom. I’ll try to do a group per day and only tot up the results at the end of the voting. I’d say ‘enjoy’, but I doubt you will, somehow.

Graham served his apprenticeship with Rangers, and made his name with Torquay. His form for the Gull, a goal every three games, convinced Wigan to pay £215,000 for his services. He helped them to the Premier League, albeit in a bit-part role, before Sheff Weds paid £250,000 for him in 2005. He had a successful loan spell with Huddersfield, but was plagued by off-field problems. By the time he arrived at the Bank, he was a roll of the dice. Sadly, the dice didn’t even show one; they rolled off the table. He made two starts, and in one of those he was hauled off at half time.

It’s shocked me Rory May made nine appearances, although seven were from the bench. Keith Alexander signed May and hoped he would bring the goals that he was eternally searching for. He wasn’t even remotely close. His pathway at Coventry ended in 2003, and his career with Lincoln ended a few months after that. Gary Taylor-Fletcher and Francis Green arrived, and Rory May was sent on his way. He wasn’t a good signing, he wasn’t up to standard, but he isn’t the worst on this list.

Bohan Dixon was one of Gary Simpson’s signings arriving after a short spell at Accrington Stanley. He was used mainly as a substitute, a somewhat ungainly and unorthodox one at that. He did come off the bench to score twice against Hyde, and also chipped in with a goal in our 3-3 draw with Chester. However, he wasn’t able to cement a first-team place and a 24th minute sending off in a tough encounter away at Grimsby didn’t help his cause. He wasn’t a great player, but in context, he wasn’t the worst signing either. 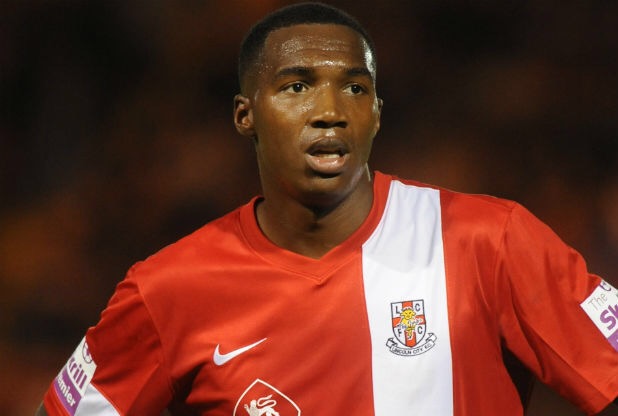 Anderson looked great during his loan spell, but it didn’t go well for him after that. He came on loan from Fulham and was a young player reaching the end of his pathway; it could be said Chris Sutton’s signing of Anderson (and Adam Watts) was ahead of its time. Sadly, Anderson joined permanently in July 2010, and played in the awful season which saw us relegated. That has tainted his memory somewhat, as I remember him as a decent, if unspectacular full-back.

Rodney had a handful of outings for Forest and Bradford to his name, which gave him some reputation when he signed for us, but he wasn’t a success. I remember him best from a moment of commentary where he tackles one of his own players, leaving Michael Hortin in stitches. He later turned up at Hartlepool in the Football League, but retired at 30 to concentrate on a career outside of the game.

Spencer was a former Everton youth who played for Southend United, briefly, before signing for us. He bagged four in 14 for Southend in 2009/10 in League One, but dropped into League Two with them at the end of the season. He moved to us, was really poor in an incredibly poor team, and left with no goals. Two years later he hit ten in 35 for Hyde, including one against us at Sincil Bank.

There’s no doubt, like Bob Latchford yesterday, that if this poll was conducted amongst people who have watched fifty years of Lincoln City, Taxi Tynan would be winning this group hands down. Zero doubt at all. Why? he was our record signing at the time, costing £33,000 from Sheffield Wednesday, where he scored 31 goals in 91 outings. £33,000, taking into account inflation is around £200,000 today. What did we get for that? Nine games, one goal and a loss of £7,000 in just four months. Later played in the quarter finals of the Cup Winner’s cup and cemented himself as a Plymouth legend, helping them to the FA Cup semi-final and becoming the leading scorer in all of the Football League in 1985.

I genuinely have no idea how he’s ended up on this list. I remember him as a decent midfielder for us, playing between 1993 and 1995. He was injured for the start of the 94/95 season, but came back in and did well. I’m sure whoever nominated him had their reasons, but it seems harsh.

If you’re a keeper, and your only game on loan is a 5-1 defeat before you’re sent packing, then you find yourself on these lists. In context, he was a young stopper, he played once and he went on to have a half-decent career; still, not exactly a Lincoln Legend.