I can guarantee you that the title alone means this blog will get significantly less hits than my City articles usually do. It has a word contained within that many Imps fans seem to find offensive and upsetting: Thommo.

Ever since Thommo left his job at Notts County he has been hanging around Sincil Bank, commentating on a match day and throwing his hat in the ring  every time the Imps hot seat becomes available. Each time he loses a little more credibility with Imps fans, and yet each alternative appointment takes us further away from where we once were. Granted CM has changed that recently, but nonetheless the job comes up and Thommo is mentioned as a candidate. Whenever he’s mentioned on social media the usual howls of derision begin calling him everything from a has been to an out and out irritant for the ears. It’s fair to say Steve Thompson isn’t popular with some of the Imps support. 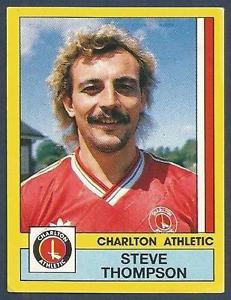 Now I want to play devils advocate for a bit, and tell you why the idea of Steve Thompson taking the managers job might not be such a bad idea Before you reach for the log out button though, I assure you he wouldn’t be my first choice at present. I’m not here trying to sell you him as a manager, I’m here to point out that the disgust the mere suggestion is met with is wholly unfair on a man who’s brash and outspoken demeanour actually masks an astute and experienced manager.

Firstly lets do the Wikipedia bit and discuss who Steve Thompson actually is. Steve was a very successful defender who played for City over 150 times during the halcyon days of Colin Murphy in the early 1980’s. His imposing figure and hard tackling earned him a move to  Charlton Athletic, which is where this blogger first encountered him on a Panini 87 sticker. He captained the Addicks into the top flight, and towards the end of his career came back to Lincoln as a player bringing his appearances to 180. He’s usually mentioned as a ‘legend’ at the Bank and fans a little older than me will recall him extremely fondly as an all-action, no-nonsense hard man.

In November 1990 he took over as Lincoln manager with us languishing near the bottom of the fourth division (what we’d give to languish there now). He guided us to a strong finish and the next season landed us just a couple of points outside the play offs. However rumours of his colourful personal life circulated the terraces and his contract was not renewed in 1993. I recall reading something by the late John Reames who praised him as a manager saying he took defeat hard, but also got carried away a little with success.

In 1998 he surfaced at Sheffield United and guided them to the Play Offs and the semi finals of the FA Cup. He has a bit of pedigree you see, and although he goes to great lengths to point it out on twitter, he does have a point. He has ‘been there, done that’. He worked under Keegan briefly at Newcastle and under Murphy again at Notts County.

Mind you a later spell as  Notts County manager and at Cambridge damaged his stock a little bit. He failed to keep Cambridge up in a six month spell there and after a relatively unsuccessful spell at County he returned to the radio to form a somewhat questionable double act with everyone’s favourite anti-Lincoln commentator Michael Hortin.

Since then I think he’s managed to grate on quite a few listeners of the radio with his strong outspoken views and his constant referencing of ‘his friend Nicky Law’. Personally I quite like his commentary, it is a nice relief from Sporting Hortin cheering opposition goals. In actual fact he speaks quite a lot of sense about the game. One thing that really stuck in my mind was an assessment of Josh Gowling in a city shirt. Josh had tried to be fancy and lost the ball and he remarked ‘defenders only have to do two thing. If it comes towards your head, head it away. If it’s in to your feet, kick it away’. It may be frighteningly simple but would we be in the position we are today if Steve Tilson’s defenders had heeded that advice?

Steve Thompson would also invariably come with one of his good friends, and I’d imagine the most realistic prospect would be his former team mate Mick Harford. I’m not going to wax lyrical about Mick, but he is one of my all time favourite footballers for his attitude and approach to any situation (hit it head on, and hard). He’s a respected coach and former manager himself, and he hasn’t sullied his reputation with Imps fans. If they’d take over after Sutton I think we would have stayed up because Mick as a personality brings reason and balance to the fiery cannon that is Thommo. Anyone at the 2010 Sports mans dinner that saw them together drinking will testify that!

Nobody has watched quite as much Lincoln City as Steve Thompson in the last eight or so years either. He’s travelled up and down the country watching Conference football every week, analysing it and studying it in order to pass opinion. He’s seen a club fall from grace to near oblivion and now begin to creep back up. He knows the current squads strengths and weaknesses and he knows how a majority of our opponents approach games. Once again nobody can refute that fact.

I could go on but I won’t The sad truth is that if Steve Thompson, former Imps defender and FA Cup Semi Final manager got the job then crowds would drop. People seem to have a dislike for a man who has actually had a decent career and who has actually managed at a decent level. Those fans wouldn’t come to games because they disliked what he said on the radio or they dislike his brash and self confident personality. They don’t know if Billy Heath is the same, but it doesn’t matter. They’re under the impression that in order to be successful as manager of Lincoln you have to be managing elsewhere at this moment in time. I’m afraid Thommo doesn’t fit the bill for them, and apparently he doesn’t fit it for Bob either.

I find it a real shame that a man who should command a bit of respect at the club is often derided on social media. Any other player with those appearances and the career behind them that he’s had would be welcomed, and yet for some reason Steve isn’t. People consider him a dinosaur, and yet those same people have mentioned the likes of John Still as a good manager to get us out of the division.

I also find it a shame that some people say they wouldn’t come and watch City if Thompson was in charge. They’re great fans aren’t they? If we don’t appoint a manager they approve of they won’t support the team? Does armchair football really have such a strong appeal that they’ll use an excuse as flimsy as the manager to stay away? I haven’t approved of a lot of managers over the years, but as a Lincoln City fan they wouldn’t be a reason to not come to the ground.

To finish ponder on this. The last time Bob Dorrian picked a manager he got Steve Tilson. After that he got Holdsworth and after that he got Simpson. Not one of those three managers worked out, so maybe the candidate Bob doesn’t want should be first in the door for an interview? Before Chris Moyses took over he had been running an engineering company and he’s managed to take the club forward. He was a youth at Lincoln, made 4 appearances and had previously managed Lincoln Moorlands Railway, and yet fans backed him. So why would you not back a 180 appearance veteran and moderately successful experienced manager who has spent the last few years earning a living on the radio?

Predict the Imps’ next result