The issue of betting in football has never been as relevant as it is today. Every week we hear of players being suspended or investigated, and it’s the topic at the fingertips of journalists and bloggers alike.

Most recently it has been revealed the seven AFC Fylde players are under investigation, not for betting on games involving themselves, but gambling on top flight matches. If they’re found guilty they could end up suspended from football in much the same way Joey Barton already is.

Betting has become an integral part of our football culture, a match day bet is as common as a pre-match pint in modern Britain. Even when you physically had to go into a bookies it was popular, but now all you need is an app and your bank card number and you’re away. I guarantee 50% of people reading this have a bet in some way or another on a Saturday.

What’s your favourite? Are you a straight out accumulator fan, or do you delve into the more complex ‘goals over and under’ fields? Maybe you just have go for first goal scorer and final result, bigger odds but more specific predictions. Whatever you prefer you probably discuss your bets with mates who have similar tastes. Go on how many of you have a gambling related betting story? I do, I once had a 65-1 shot close to coming in on a fiver stake. As it transpired Andy Booth dived to cost me that bet, and cost Lincoln the play-off semi-final.

My point is that fans accept gambling as part of the experience these days. Those who promote the games know this, and up until very recently the FA had gambling partners. They’ve ended their relationships but the move is futile, the FA moving away from gambling sites is like throwing one piece of toilet paper in a bath to soak up all of the water.

Teams still carry the logos of betting companies, the adverts appear at half time of games and we’re all still throwing hard-earned money at City to win 3-0 with Luke Waterfall to score first. To put it quite simply, you will not stop people placing bets, it is a hobby and a past time.

I don’t see anything wrong with footballers betting either, as long as they don’t bet on their own matches. I wouldn’t even have a problem with players betting on matches in their league, I can’t possibly see how they could influence a result that they’re not directly involved in. Some complain they may have inside information, if that is the case so what? So what if they know Luton’s centre forward is injured, or that Carlisle might have to field their reserve keeper? Good on them I say, if you get a chance to turn over a bookie you’d take it too. Knowing stuff like that is only like getting a red-hot tip on a horse race. It’s one of the variables that makes betting exciting, thinking you’ve got one over on the bookie. 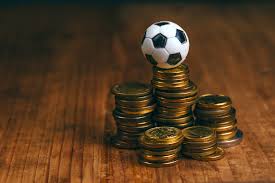 If the players start betting on their own games then I see a problem, if the bet places their integrity at stake as well as their money, then we have an issue. Football is a sport and no matter what you saw from Steve Tilson’s team in 2001, it should be played by twenty-two committed men trying to win. My personal belief is that then, and only then, should a player be brought in for questioning.

There’s also these ridiculous novelty bets that encourage irresponsible actions and behaviour. We all remember Piegate and tubby keeper Wayne Shaw. He had a carrot dangled in front of him as bait and he grabbed it, which is surprising as he didn’t strike me as a vegetable fan. I don’t think he did anything wrong from a legal standpoint, but morally he waded off into the grey area with his pasty in hand. None of that would have happened if companies had acted sensibly.

‘Bet sensibly’ the adverts cry, whilst their mere presence urges you not to. Footballers are real people, just like you and I. I’m not sure how the sport justifies telling them betting is wrong whilst accepting the money that comes out of the other end. You might be told to bet sensibly, but nobody tells bet365 or Paddy Power that they need to offer sensible markets and odds either. If you give a market on the quickest throw-in, somebody somewhere is going to see a chance to earn a bit of money. It isn’t a new problem either, I recall Paul Kitson coming under intense scrutiny for an early throw-in, and Matt Le Tissier admits it in his book.

In 2017 betting is very different to back then. When Paul Kitson drove the ball out of play in the first minute, only a handful of bookies were offering markets on throw-ins. The affair back then was clandestine and involved dubious phone accounts, brown paper bags and Singaporean businessmen. Now betting takes about thirty seconds and can be done with your trousers around your ankles on the toilet.

If these Fylde players are found guilty the sport needs to examine itself before handing them any punishment. They’re non-league players and it seems as if they’ve been betting on leagues higher than that which they play in. Is that really such a heinous crime? As much as we enjoyed seeing Joey Barton fall from grace, were his bets really unethical and bringing the game into disrepute? Or is he just a young man with the means to bet big who got a thrill from it, just like most punters?

I know this won’t happen, but I’d like to see a relaxing of the rules for footballers betting. If they were allowed to gamble, but not on their own games, what would it hurt? They can’t influence the results, they can’t risk their integrity and most importantly they wouldn’t find themselves dragged through the papers for committing a so-called crime that most of the fans who watch them can indulge in at will. To deny footballers the opportunity to place a bet is unfair, and punishing them for gambling on games they have nothing to do with is ludicrous. It is like you being questioned by the police for shooting an air rifle in your garden because someone in London shot a woman with one.

I’m not going to chastise clubs for taking the sponsorship money either, football is a beautiful sport thriving in a corporate and capitalist world. If gambling companies are making enough money to shove their logo on a Premier League team’s shirt then fair play to them, at least the money is coming back into the game. Football doesn’t need to make wholesale changes with regard to whose money it accepts, it just needs to readjust its values and understand its players more. Maybe then we could get back to questioning the moral repercussions of Forest Green spending eco energy money on propping up their village team, and leave the rich kids to fritter their cash away on how many throw ins the Union San Filipe and Magallanes will produce in the Chilean second division.

If there’s a footballer in England who can influence that, I’d like to meet them.

Lincoln City News 24/7
BECOME A PATRON OF THE SITE FOR AS LITTLE AS £2 PER MONTH Become a Patron!