Oldham Athletic are the visitors tomorrow night, a game which could see us go five points clear at the top of the table with nine games left to play. Could.

It’s been 20 years since Oldham last came to the Bank in the league, grabbing a 3-1 win in which we were lucky to get our one. It gave us a stark reminder of the difference between Division Three and Division Two at the time. Honestly, we were awful.

We went into that game having hit the top spot in the league a week earlier, and were a team full of confidence. When the draw was first made I was disappointed, I hoped for a good cup run and I thought as a National League team, to draw a former Premiership side battling in League One meant we were more or less already out of the cup. I believe in my club, but I’m also pessimistic when it comes to achieving the impossible, whether impossible is an opinion or whether it is fact.

Prior to the Oldham game our average attendance was 3374, and that had been boosted to 3917 coming to watch us beat Maidstone. Prior to the Maidstone game we had won away at FGR (3-2) and York (4-1), and yet still just under 4,000 fans came along on a Saturday afternoon a week later to see us chip away at FGR’s lead in the league.

Our biggest crowd of the season up to that point had been 4049 against Solihull Moors which looked to be an odd game to start breaking the 4,000 barrier. We had won five on the bounce, including a 1-0 win at Tranmere which had taken us top. Psychologically perhaps there is something about being on the top of the table that brings people out of their armchairs. We drew against Solihull, and four days later just 3578 watched as Barrow beat us 2-1 and we slipped to third. 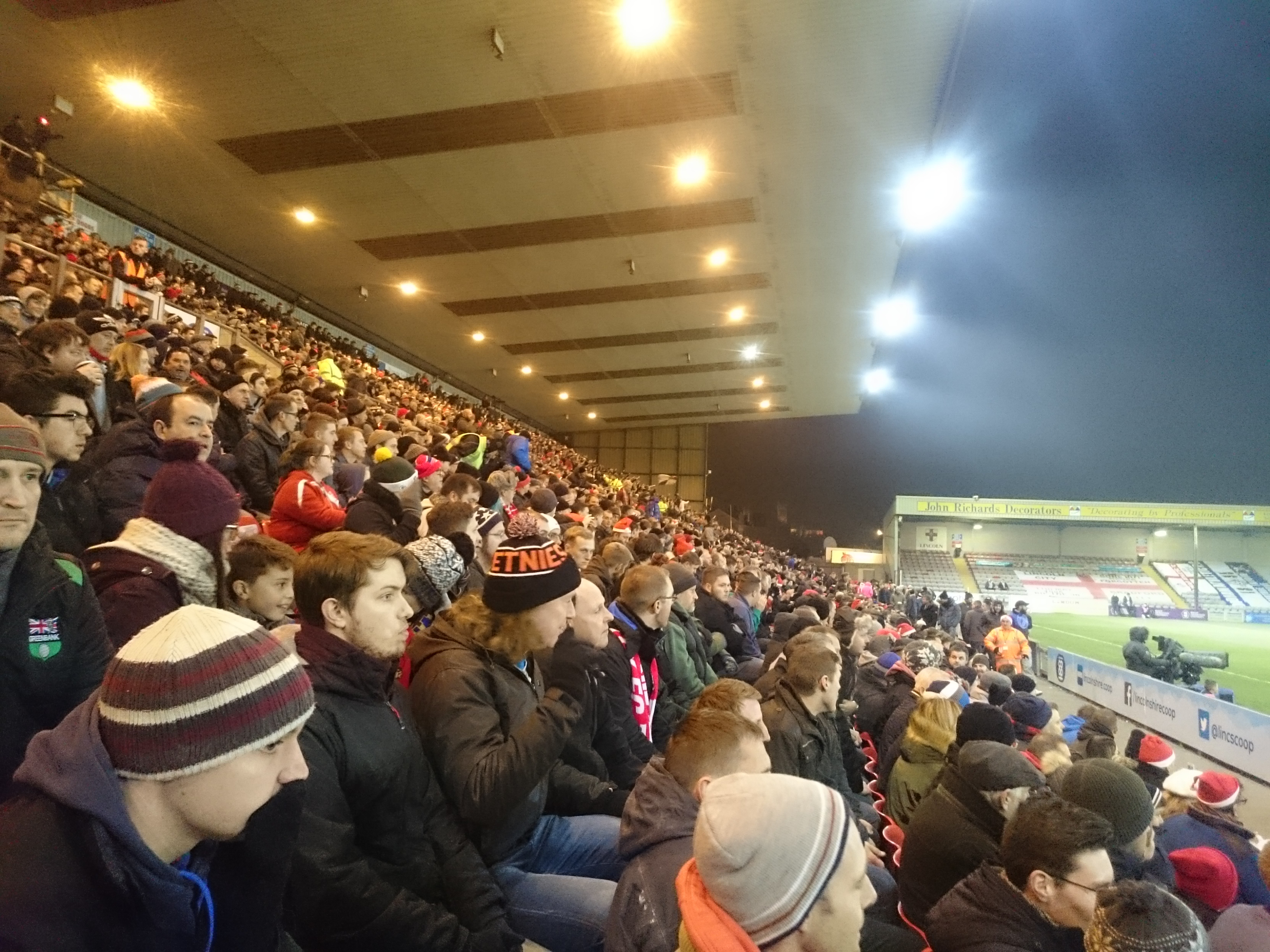 Attendances had been good when compared to previous seasons, and nobody was complaining at all. When the Oldham game was announced as being live on TV part of me wondered if the local residents might stay at home in the warm to watch the game. It was played on a Monday night though, and that meant without kicking a ball we would be in the third round draw. That was made prior to kick off, and shown live in the TP Suite. It added an element of occasion to the evening. Maybe it was that which attracted the extra fans. Maybe it was being top of the table. Maybe a force greater than you and I just dictated that this was the night when Lincoln City Football Club would show the world they’re back.

7012 fans came to that match, 3,000 more than any other match that season. Oldham brought 415 which meant from somewhere an extra 2500 fans who hadn’t previously been to Sincil Bank that season chose to come along. Those numbers may be flawed of course, it may be many of the fans had been to the odd game when others were missing, but in essence one match saw a 70% increase on our highest attendance, around 100% increase on our average attendance. This was a Premiership giant coming long, it may have been a tough encounter on the pitch, but Oldham are not exactly a draw off it. We faced them in the League in 1998 and just 3224 came along.

Whatever it was that brought the fans out, it brought them in numbers. Before the game the plan was to watch the cup draw in the TP suite, but that plan was dashed when we realised half of Lincoln had chosen to do the same. It was at that point we realised the game might attract a few extra fans, so after watching us pull Ipswich out of the bag we went into the ground. If anything I was a little bit disappointed with Ipswich, I didn’t think it offered much reward if we were able to beat Oldham. It wasn’t the first time I was wrongly irked by a cup draw, and it wouldn’t be the last either.

As you would expect from a December evening it was cold and eventually it would become quite foggy. On a night like that you need scintillating football to warm you up, and despite us playing a team two tiers above us, it did feel like there might be an upset on the cards. In Theo Robinson we had a player who had experience of a higher level of football, but as a unit we were playing with confidence and zest. The only thing that may have worked against us was the absence of Sean Raggett (sent off against Wrexham earlier in the week) and his usual understudy Callum Howe (cup tied from his Southport spell). Veteran defender Jamie McCombe came in for his first outing since August.

Lincoln immediately attacked Oldham with (and I’ll use these words as liberally as Danny does) a real energy and purpose. Terry Hawkridge had the first decent effort at goal, set up by a great pass from Theo Robinson. When your team sets about their game plan early it gets the crowd onside, and when that crowd is over 7,000 it makes a big difference. Oldham were used to getting home crowds of 3,500 and they crumbled under the pressure of such an electric atmosphere.

It was Hawkridge again involved when City took the lead. He brought the ball infield from the left flank and landed a diagonal ball on the head of Matt Rhead. As he did all season, he angled a header back across goal and into the danger area. Theo Robinson didn’t need a second invite to make his run, he probably didn’t even wait for the first. He was playing for a permanent contract in the Football League, and this was his bread and butter. He cut across the keeper and neatly headed the ball away to the keepers right. Sincil Bank went off like a Kalashnikov. Nobody seemed to care that it wasn’t so much a header as a scuffed shoulder into the net. In fact, had he caught it squarely on his head the keeper might have saved it. He didn’t, and City were 1-0 up.

Fans inside Sincil Bank hadn’t witnessed an atmosphere like that in years, bar perhaps the 3-2 win against Grimsby Town a year or two earlier. It was clear Oldham hadn’t prepared for going 1-0 down, and they hadn’t prepared to play in front of such passionate home support, high in numbers and loud in voice. Within seconds they collapsed completely.

Rhead tried to collect the ball in midfield but looked to be pulled over. The referee wasn’t having any of it and Carl Winchester brought the ball away. He looked to play a square ball across the front of his own 18 yard area, and the whole stadium could hear Steve Thompson’s intake of breath. He always says square balls lose you games, and this one did. Terry Hawkridge popped up from nowhere to pick off the pass, stride into the area and finish with all the confidence of a 30-goal a season striker. 2-0 to the Imps with 24 minutes on the clock.

Cries of ‘who are ya?’ rang out around the Bank, and for the next 20 minutes it was hard to spot which team were non-league. Oldham did have a chance, Ryan McLaughlin forced a save from Paul Farman before a weak effort by the hapless Winchester was cleared by a resolute Imps defence.