The transfer window is open, and we’re already talking about losing out in the race for Akinola, and losing pace in the battle for Ricky Miller. Players don’t necessarily mean points though, it is minutes on the pitch that will get you promoted and the next 30 days will be absolutely crucial in our race to the title. There’s some humdinger games coming up, not only involving us but also our title rivals.

I’ve decided to look at all of the top six and assess their games in the league over the next four weeks. There is little doubt that come February 1st, although nothing will be decided, we’ll have a much clearer picture of the team that has the credentials to go all the way, no matter who they sign.

The Super White Army really dropped the ball in December. After hauling themselves back into the title race they slipped up at Sincil Bank, and then on New Years Day they faltered going down 4-2 to Macclesfield.

They won’t be getting a chance to pack the league games in either. Due to FA Cup commitments of rivals, they only play twice more in January in league competition. They have to wait until January 21st to get a chance to reclaim the top spot, and they’ll only do that if we don’t get a result at Dover. Their opponents are faltering Woking, and I suspect they’ll grab three points there. The following week they have a massive clash with Dagenham, another of our title rivals. Do they have what it takes to take six points and try to at least stay in touch with Lincoln? I think four from six is a realistic haul for arguably the biggest side in our league.

From nine points clear to six points behind in just a month and a half. It’s fair to say things have gone a little pear shaped for our ‘friend’ Mark Cooper over at FGR, and I have to confess it couldn’t happen to a nicer bloke. It’s well documented I despise everything that club stands for at present, be it all-wooden stadiums, falafel at half time or overspending on underachievers, everything about them is just wrong.

They’ve got four games to try and reduce our lead starting with a trip to Bromley on January 7th. We’ll be in Ipswich that day but I suspect a few of the 5,000 travelling fans will be watching their phones to see how the Villagers are getting on. Bromley are a tough prospect as we found out, and FGR cannot find form at the minute, although they are finding goals. I can see them winning to get themselves back on track.

They have a midweek game on 10th of January and a nine goal swing could see them topple us at the summit of the table. They travel to Eastleigh, and I can’t see either a lot of goals, nor a win for them. Martin Allen hasn’t had the best of starts on the south coast, but the longer he has with those players the more of a unit they’ll become. Expect a draw.

After a routine three points from Braintree on January 21st it is back to the tough games as they visit Barrow on the 28th, FA Cup allowing. We know that will be a battle royal, and I’m not sure they have what it takes to cope with Barrow’s robust and direct style, especially not at home. I can see FGR ending January with seven points from four games, simply not enough to see them welcome February with title aspirations.

From one of my favourite teams to another. All the Dover talk is about the destination of Ricky Miller, but in reality they have enough with Moses Emmanuel and Ross Lafayette. One player doesn’t make a team, and (I’ll use this again as it went down well t’other day) the Rabble from Crabble have enough to cope without their talisman should he hop it.

They open with a home tie against York City which I can only see going one way. York are terrible at the minute and Dover are usually solid on home soil, so they’ll grab three points. Three days later they travel to Macclesfield and a win would see them close the gap on us to one point. Macc proved yesterday though they’re not going to rollover for anyone, and Dover don’t travel all that well. Expect a draw, meaning by the time we meet on the 20th we’ll be three points ahead of Dover with two games in hand.

Will we beat them? I hate predicting Lincoln results, but by then I imagine we might have strengthened and we’ll have an FA Cup fourth round tie to look forward to (!!!) so we’ll be on a high. The TV has been kind to us this season with three wins from three, but I think we’ll end up coming away with shared spoils on our fourth televised outing.

Dover finish with a visit from Chester on January 28th, and knowing their title aspirations have been hit I suspect they’ll end up bringing back just one point. They’ll be in the play off mix, but I can’t see them troubling the top spot.

The bubble was always going to burst, an unbeaten run is there to be taken away from you and it happened in style on New Years Eve, a 4-1 mauling at the hands of Gateshead signalled the end of that air of invincibility Barrow carried around with them. They’ve got some tough matches coming up too, January is as tough for them as for anyone else.

It starts inauspiciously enough with a visit from Southport and a chance to get back to winning ways. How a team reacts to defeat can tell you a lot about their character and resilience, as we proved yesterday. Do Barrow have what it takes to immediately put their heavy defeat behind them? I think so, and I think they’ll be back to winning ways in time for a trip to York on January 21st.

I believe Barrow really will have an FA Cup 4th round tie to look forward too as they face Rochdale at home in the third round, and that could begin to derail their promotion push. I can see them dropping points at York, at some point the Minstermen have got to get some points on the board, and the top teams will not always beat he bottom teams. We’ll travel to Barrow on January 24th still well ahead of them in the league, and a draw will be a good result for us, which is what I expect us to achieve.

Their third game in seven days would be the clash with FGR on 28th January which I suspect might be moved because of the cup, but I’ll go with it for now. If it goes ahead it will mean they’re no longer in the cup, and for that reason I think they’ll do us a favour of sorts and give FGR no reason to celebrate the end of the month.

The Daggers have slipped away a bit recently, and they have Braintree today which I suspect will bring them three points and put them back into the play-off spots. Whether they can maintain that pressure is another question.

They travel to North Ferriby on 7th and I expect they’ll go home with another three points, following that clash they welcome Bromley on 21st. As well as Bromley do at home I’m not convinced they have enough to do Dagenham on their own ground, but a share of the spoils is possible.

The 28th is another big clash in the race for promotion, Dagenham travel to Tranmere and as I’ve mentioned already will probably result in a draw which both teams will find inadequate in their respective fights for positions.

Always save the best until last, we move on to our own beloved table toppers. Our focus isn’t on the league for the next 19 days, we’ve got a big away cup tie against Gateshead to worry about, and some other game on Saturday.

By the time we do get back to league action I suspect we’ll still be on top, and that gives us something to fight for. I have already stated I can see us getting two points from two games against Dover and Barrow, both would be regarded as good points in my opinion. The trick is now not to lose to our rivals, and keep beating the teams that are well below us, and later in the month Braintree and Solihull Moors are our hosts. Solihull have had a good Christmas, but we do owe them one after the 0-0 draw at the Bank, and I’m afraid as much as we are fond of Braintree these days for the Cowley Brothers, we should have enough to end January eight points better off than we are now.

I’m not being deliberately pessimistic with eight points from four games, but if that is our haul, whichever way it comes to pass it will be sufficient reward for a month that comes with cup distractions as well.

It’s a bold statement I know, but I’m thinking that we can now see a month out without slipping off the top of the table. The fixtures are kind to us in terms of who plays and when but not so kind knowing that Dover and Barrow come up in back to back games. We can afford to draw both games and still maintain a title challenge, and I’ve perhaps been a little cautious by predicting two draws. The key will be to ensure we remain focussed despite the cup distractions, and hopefully irrespective of Ipswich and Gateshead we can excel in the league.

In my mind we’ve achieved our FA Cup goals, a win over Ipswich would be fantastic for everyone connected with the club, but it would also distract from the main objective which is progression to the Football League. There’s a lot of football to be played between now and April 29th, many points to be won and lost. If we can stay ahead of the chasing pack, games in hand or not then psychologically we will always hold the advantage.

Go on, admit it: You didn’t ever think we’d be in this position twelve months ago did you? Nope. Me either. 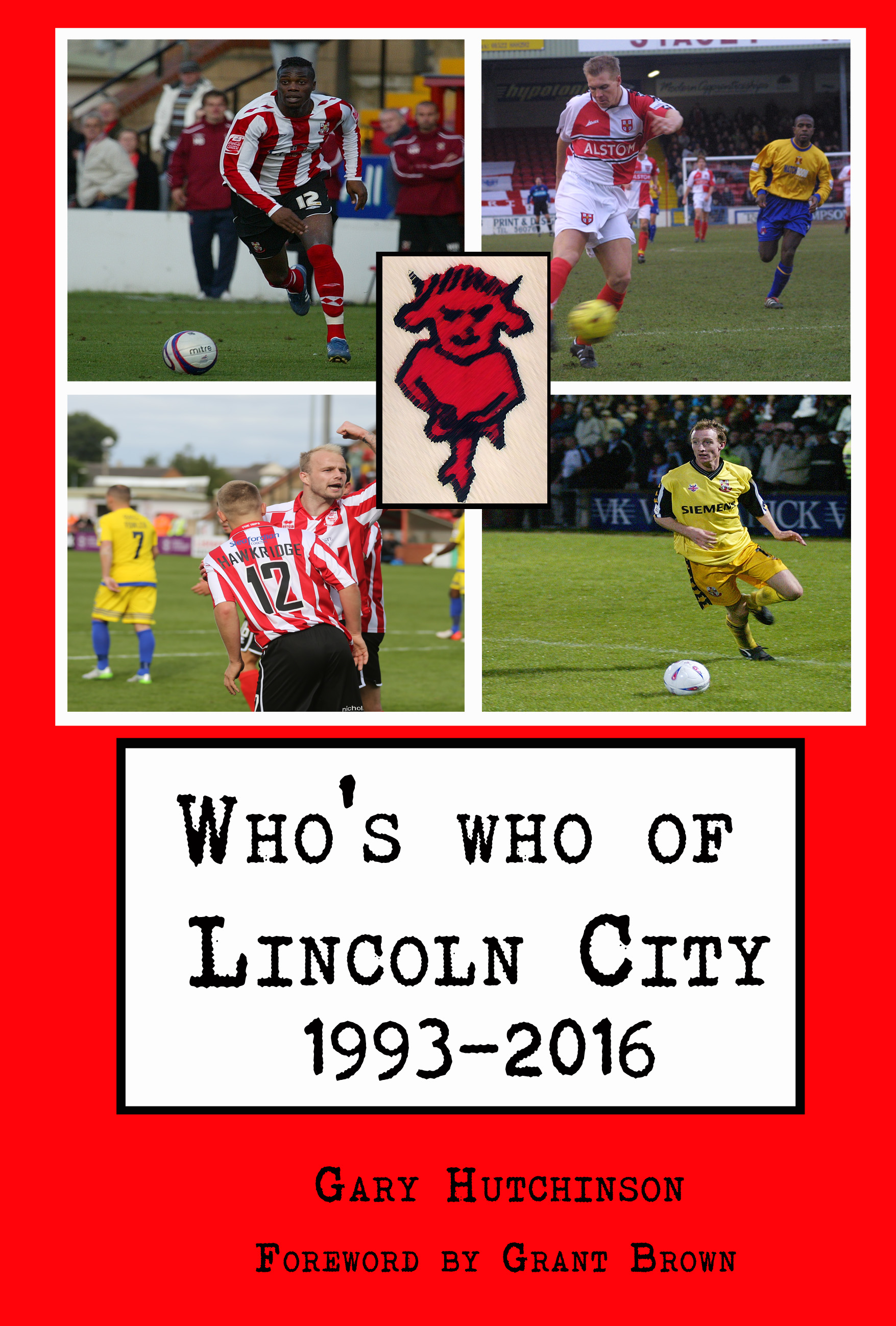 Thanks to Amazon’s bloody awful ‘author supplies’ chain, there is still just one way to buy ‘Who’s who of Lincoln City 1993-2016’:

If you want to buy direct from Amazon then click here